A little info about some of our breeds:


Silkies
Silkies were developed in Asia, possibly China. The oldest surviving written account of the breed comes from Marco Polo - he wrote of encountering a 'furry' chicken during his travels throughout Asia in the 13th century. In 1599, Ulisse Aldrovandi, an author and naturalist from Italy, published a extensive treatise on chickens which is still read and admired today. In it, he wrote of "wool-bearing chickens" and ones "clothed with hair like that of a black cat". Silkies most likely made their way to the western hemisphere by the Silk Road and maritime trade. Myths quickly spread about the breed, with early Dutch breeders telling people that they were produced by breeding chickens and rabbits together. Sideshows even advertised them as having actual mammalian fur. Finally, Silkies made their way to America and were officially recognized in North America in 1874.

Silkies are bred in a multitude of colors: Black, Blue, Splash, White, Red, Buff, Partridge, Silver Partridge, Lavender, Cuckoo, Porcelain, etc. The breed is also known for a few very specific characteristics: a walnut comb, black skin, and five toes instead of the normal four. Silkie hens are also known for their penchant for going broody and their superior mothering skills. As such, they're not known for being the best egg layers. However, they tend to be wonderful at interacting with people.

Although Silkies are not a breed that is rare and are in fact extremely popular, I have them because they're a lot of fun and they make wonderful broodies.

Wheaten Marans
"The hens that lay James Bonds' favorite eggs." Marans are well known for laying beautifully dark chocolate eggs. The breed originated in a marshy area of western France, and was first imported to the UK (by means of smuggling hatching eggs hidden in a picnic basket) in 1929. They were later legally imported into the country and eventually made their way to America from there in 1944. The breed is generally quiet and laid back, but tend to be good foragers. Marans are bred in many different colors, however, I only have the Wheaten variety.


Dominiques
Dominiques (sometimes called Domineckers, Dominickers, etc) are recognized as America's first chicken breed, and they played an important part in the formation of our country by accompanying pioneers on their travels. Dominiques became quite plentiful across the nation due to their popularity as a dual-purpose breed. By the 1920s interest in the breed had waned and over the next few decades they became almost extinct. By the 1970s, the breed was listed as being in Critical status by the American Livestock Breeds Conservancy meaning there were less than 500 breeding birds in North America. Due to a recent increase in interest in heritage breeds, Dominiques are now on the ALBC's Watch list, indicating a lesser danger of extinction. However, true Dominiques are still considered to be quite rare in certain parts of the country. More common are single combed birds mistakenly called Dominiques.


Polish
Polish (also known in other countries as Polands and Paduans) are the most popular of the crested breeds. They're also one of the oldest, having been recorded as purebred as early as the 16th century. Contrary to their name, their true origins are unclear. They most likely originated in continental Europe, but not necessarily from Poland. Their name, by the way, comes from their resemblance to the square, spreading crests on the feathered caps historically worn by Polish soldiers. The breed is believed to have made its way to America by 1830-1840.

Polish are bred in many different colors; a few examples are: White Crested Black, White Crested Blue, White Crested Splash, White, Black Crested White, Buff Laced, and the color I most want to add to our flock next, Tolbunt. They can also be bearded or non-bearded. They're believed by some people to be ditzy and a little slow witted, but I think a lot of that is due to their cautiousness (their large crest can easily obstruct their vision leading to that cautiousness). Polish are currently listed on the ALBC's watch list.

Out of all of my chickens, the Polish are not our best layers as it takes a little longer for them to start. But their beauty and personality more than makes up for that.


Update on October 18th, 2012:
I have just added Breda and Rhodebars to the flock.

Breda
From Greenfire Farm's website: ". . . breda are so wild and extreme in their appearance that they look like they were designed for the movie Avatar." I think these are my new favorite breed, one reason being that Breda were at one time common in the US. Then the Civil War came along and they began to decline in numbers until they were practically extinct here. However, the breed was kept alive in Europe. Breda are known for their striking appearance, unique gait, and for not possessing a comb.

Breda have been known by other names - kraaikops, guelderlands, grueldres - over the years. Their origins are somewhat obscured by the sands of time - they might have originated in Holland, Belgium or France (Although, there is a city in the Netherlands called Breda). Although, I'm not sure exactly where they came from, I do know that they're a striking breed that will hopefully one day regain their popularity in the US.


Rhodebars
From Greenfire's website, "Rhodebars are the uniquely wonderful offspring of a shotgun marriage between the Yanks and the Brits." In the 1940s, British geneticists created an autosexing breed capable of laying large quantities of eggs by crossing Golden Brussbars (a rare British breed developed by R.C. Punnett - you know, of punnett square fame - and Michael Peace) and Rhode Island Reds (the most common and well-known of American chicken breeds). Rhodebars enjoyed a brief stint of popularity as egg layers in Britain's commercial industry, however, now they're practically extinct. It's estimated that less than a hundred hens remain in the UK, and until Greenfire Farms imported the breed recently, none existed outside that country.

As I mentioned earlier, they're autosexing. Autosexing means the chicks can be sexed at hatch based on their coloring (females are chipmunk colored, while males are lighter-colored with a white spot sometimes on top of their heads). However, don't confuse autosexing with sex link, which can also be sexed at hatch. Sex linked chickens are hybrids of two different breeds (such as, Barred Rocks and Rhode Island Reds), and as such will not breed true. I love autosexing breeds (we already have Pilgrim geese, which are well-known for being one of the few waterfowl breeds to possess that quality), and I think these are going to be a great addition. 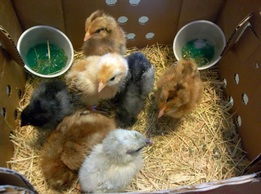 Our new Breda and Rhodebar chicks just after arriving.
Newest Additions (as of August 2013):
Hamburgs
History has it that the first chicken show was a contest to settle the dispute of whose rooster was most magnificent. It was held in a pub in England, in the early 1800s, with the bartender acting as a judge, a copper pot as the prize, and the roosters competing were said to be Hamburgs.

Hamburgs were found in Holland by the 14th century, but it's uncertain when or how they actually arrived there. The Dutch developed the Silver Penciled and Golden Penciled varieties of the breed. By the late 1700s, these Penciled Hamburgs had arrived in England. The English embraced the breed with zeal, and created the Black, Silver Spangled, Golden Spangled, and the White varieties. By 1856, Hamburgs had made their across the Atlantic Ocean to arrive in America.

The breed was first called the Hamburg chicken by the 1840s. However, before that the breed was known by several other names, such as: Pheasant fowl, Pheasants, Yorkshire Pheasant, Silver Pheasant-fowl of Yorkshire. Early during the breed's existence in England, there persisted a common belief that it was the cross between a common chicken and a pheasant. The breed is characterized as being very activity and alert. Hamburg hens were known to prefer nesting in hedgerows and had the habit of roosting in trees.

Hamburgs are prolific egg layers over their lifetime, laying a large number of eggs over several years. Though young Hamburgs can be a bit delicate, once grown, they are a very robust breed. Hamburgs are on the ALBC's watch list.